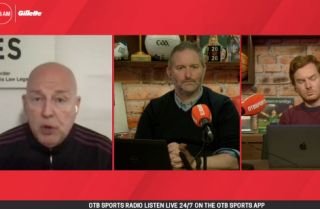 The Argentine has been heavily linked with the managerial role at Manchester United and Real Madrid at the end of the season, though it remains to be seen whether his chances have lessened after crashing out of the Champions League on Wednesday night.

However, speaking to Off The Ball on Wednesday morning, Hunter previewed the match between Real Madrid and PSG.

"If PSG cut loose tonight – Pochettino will take over from Ancelotti in the summer."

Graham Hunter is confident Mauricio Pochettino’s next destination is going to be Real Madrid rather than Manchester United.@GilletteUK #EffortlessFlow

He said that if PSG turned the gears on and won the tie comfortably, that it felt almost set in stone that Pochettino would replace Carlo Ancelotti at the Bernabeu in the summer.

“If PSG cut loose tonight, then I think Ancelotti — having been booked by Florentino Perez three weeks ago, will see a second yellow,” Hunter said. “Then, I think Pochettino will take over in the summer.”

The Scottish journalist added that Pochettino has not enjoyed his time in Paris as manager.

“Let me be crystal clear – as it stands right now, Pochettino does not want to be PSG coach next season. The conditions aren’t right. He’s not particularly enjoying himself.

“I think, either way, he has an argument to go to his employers and say he wants to leave. If he wins the trophy (Champions League), he probably gets a walking pass.

“Having had a chance to put up a cricket score in the Parc des Princes against Madrid, you’re out of the cup – and the league is a procession to me – then he walks either way.”

“I don’t know what he thinks of Manchester United, but from an analytical eye, there are similarities between how Man United and PSG is run on a day-to-day basis.

“From my analytical eye, the best scenario for Pochettino is to be Real Madrid manager next season.

“The stadium is just about finished and paid fully. The squad is very good, reasonably well-constructed. You’re working in a winning environment.

“In terms of completion, there are not masses of work to be done.

“He functions much more comfortably. It’s a club that wanted him before.

“There’s a feeling of a circle being complete. Knowing what Perez is like – Ancelotti won’t be the coach next season if they perform as they did in Paris.”

Let us know in the comments where you think Pochettino will end up this summer?