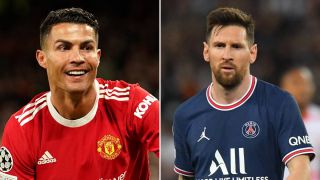 As someone who has loved watching both players throughout their careers, it’s not easy to accept that Cristiano Ronaldo and Lionel Messi are both in decline.

You could raise an argument that both have already had to alter the way they play the game over the years, especially after reaching their 30s, but it is pretty clear that they are declining forces within the game.

I say this just months after watching Ronaldo almost single-handedly guide United into the knockout phase of the Champions League — after an array of late goals in the group stages.

Messi of old would’ve grabbed last night’s game by the scruff of the neck and found a way to pull PSG through, even after Karim Benzema’s 16-minute hat-trick, and vintage Ronaldo would have over 30 goals this season for United (believe it or not).

However, when United signed the Portuguese star in the summer, I initially thought that he would play all European games with a bit part role in domestic competitions. I wasn’t expecting to see a 37-year-old play four matches in 11 days, so maybe the heavy workload is starting to show?

Former United captain, Gary Neville, has admitted that Ronaldo and Messi are on the decline in their careers.

“We may see cameos or little swansongs here and there, but there is no doubt that Ronaldo and Messi are coming to the end of their careers,” Neville told Sky Sports.

“That’s not to say they are coming to the end of their careers and will retire at the end of the season; Ronaldo and Messi could play three or four more years, knowing their fitness.

“Declining seems like the wrong word when talking about two great players, but there is no doubt they are declining forces. At this moment in time, for the first time in years, if you asked people which player in the world they would sign if I could only pick one, no one would say Messi or Ronaldo, they would likely say Mbappe, Erling Haaland, Mohamed Salah, Robert Lewandowski.

“You would be naming players other than Ronaldo and Messi, and that is the clearest sign that, while these two are still operating at the highest level, they are fading from the levels they were at before. They are no longer the best players in the world.”