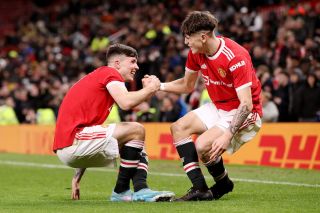 Charlie McNeill and Alejandro Garnacho both got the scoresheet at Old Trafford last night to fire Manchester United into the FA Youth Cup final.

The Reds blew Wolves away 3-0 in the semi-final and dominated throughout the match, so the full-time result was a fair reflection of the game itself.

There were 6,000 fans in attendance and we will be expecting more at Old Trafford for the final.

It’s the first time United have reached the final since 2011 — when we last won the competition with players like Jesse Lingard, Paul Pogba and Ravel Morrison.

There are several top talents in this United side and many of them stood out last night.

In midfielder, Kobbie Mainoo and Dan Gore were both exceptional, adding energy and grit to the centre of the pitch.

You can see from last night’s Stretford Paddock youth team review show that everyone is buzzing with the result and can’t wait for the final.