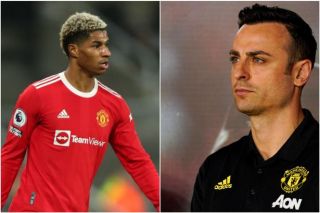 According to the Daily Mail, Rashford is considering his future after being benched for the Manchester derby. It is understood that the dream of playing for his boyhood club is turning into a nightmare after starting just two of United’s last 11 Premier League matches.

But if we are being honest about it, Rashford’s performance as a second half substitute against City showed why Ralf Rangnick hasn’t been picking him lately, with fellow academy star Anthony Elanga bursting on to the scene in recent months and offering the team something different in attack.

Rangnick decided to deploy Bruno Fernandes in a ‘false-nine’ role from the start, leaving Rashford to settle for a place on the bench, and United looked worse when he rearranged things with substitutes in the second half.

However, Berbatov believes Rashford should hold fire and wait and see what the next manager has planned for him. The former Bulgaria international told Betfair, as quoted by the Manchester Evening News: “It was strange that Marcus Rashford did not start the Manchester derby, especially with United missing Cristiano Ronaldo and Edinson Cavani.

“It’s understandable that Rashford wants to start games and, if he’s still not being picked by the end of the season, I’d expect him to be considering his future at the club. But he needs to remember that there will be another manager in charge next season and players who haven’t had a look in under Rangnick will get another chance.

“So it’s a bit too soon for Rashford to be thinking about leaving for another club.”

I remember when an 18-year-old Rashford destroyed Manchester City at the Etihad in 2016, but it is not the same player we are seeing six-years on. Right now he isn’t a shadow of his former self.