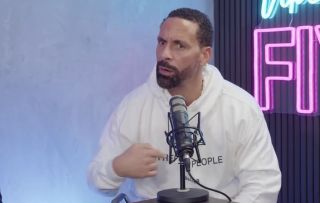 Rio Ferdinand is bound to ruffle a few feathers since he hosts a popular YouTube show.

The show airs weekly and they talk about all the biggest topics in football, which often finds Ferdinand in a position where he must tackle issues involving his former clubs.

One of them being Manchester United.

Ferdinand has been outspoken on a range of topics throughout the season and it sounds like he has hit a nerve, which is part of the job when you host a show on the internet.

The former defender claims agents of United’s stars have phoned him to ask that he cools his criticism of their clients.

This shows you the type of power agents want in the game, to squeeze out any objective commentary, all to ensure the sun shines from their client’s rear end.

Ferdinand has been asked to temper his words following the derby collapse on Sunday, saying (via Vibe with Five podcast): “I really, really hope these players are walking in the next day and are going, ‘I’m embarrassed, my pride and ego has taken a battering and I’m really embarrassed about it, I’ve got to make this right, you get me on that training field and give me every task you want to get this right’.

“The amount of phone calls I get from agents, ‘oh, can you not say this, why are you criticising so and so’, do me a favour.

“If I was being vindictive and personal and saying bad things personally about these people I’d get it, I’d take the call and say sorry.

He also added: “When I’m highlighting the positives no one’s calling then, no one’s going, ‘thanks for that, you’ve done us a favour’.

“You don’t get that so don’t call me when I’m talking negatively about your player, I’m talking from a tactical standpoint.”

Football fans aren’t stupid — they can see straight through this crap. Can you imagine if I wrote a piece on Sunday detailing how brilliant United were? Is that what these agents want from the likes of Ferdinand?

This shows the players are easily offended or their agents as naive. Probably both!

Credit to Ferdinand for calling it out.