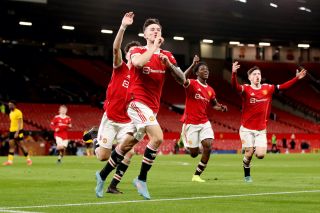 Manchester United U18s hosted Wolves in the semi-final of the FA Youth Cup tonight. It was a long awaited moment for many youth team fans as this means a lot in terms of youth football.

The game started a whole lot better for Manchester United with our forwards playing on the front foot in the opening minutes, meanwhile Wolves seemed to be more than happy to sit and wait, much like their first team.

Despite some early chances United were struggling to make that final pass. Wolves love a bit of physicality involved in the game and this was shown on a number of occasions. It was the case towards one particular United player, who was targeted by the opposition players multiple times. Isak Hansen was obviously at the centre because every movement forward was being driven by him showing, once again, brilliant quality.

Wolves were finally waking up and a couple of bad and probably not well thought movements from Vitek, things could have gone bad for United. It was crazy watching Dan Gore make those decisions in tight places and get the team out of the trouble. On the other hand our strikers kept missing chances, quite a lot honestly. However, Hansen thought things through and a brilliant cross found Charlie McNeill who made no mistake on confusing the keeper and hearing his name sound at Old Trafford.

After this, United continued to show domination but we needed more goals to find a comfort zone.

In the second half, Wolves were trying to get back into the game. On several occasions, United were caught in possesion back in the defence meaning that some of the players were not doing their defensive duties right.

The combinations between McNeill and Garnacho were once again showing why some teams are quite afraid to face these lads. While the eyes of the world might be on the Argentine playing at Bernabeu tonight, the real show was put by a recent Argentina call up. As he got a great shot to score his second of the game, it was McNeill who paid attention in the rebound shot and sealed all for United and took us all through the final. A magical night for our U18s who have had a brilliant run this far and it has been filled with goals and emotions.

It would not have been the perfect match without McNeill telling the opposition fans to shush, as they make their way to the most important competition in youth football. In the stands were Harry Maguire and Dean Henderson watching as the U18s reach the final. A brilliant team, a great display and maturity shown after not some good result during the last week. Character and domination, well done and congratulations to coach Travis Binnion and the rest of the staff on a great run. Hope we get to see them lift the trophy.