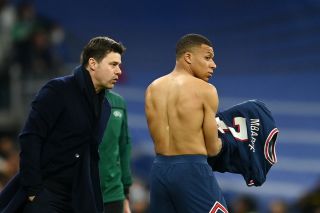 Mauricio Pochettino was predictably asked about his future tonight after Paris Saint-Germain crashed out of the Champions League.

Real Madrid came from behind thanks to a 16-minute hat-trick from Karim Benzema to dump PSG out of Europe in incredible style.

The French giants had a two-goal advantage, but they threw it away in the final 30 minutes, and their plan to sit back and hit Madrid on the counter-attack ultimately backfired when their goalkeeper had a total lapse in concentration, which led to another great collapse in Europe for PSG.

Pochettino will take a share of the blame for that. It may even lead to him being sacked at the end of the season, but as of now the Argentine is in the running for the United job whether everyone likes it or not.

He didn’t want to talk about his future and Kylian Mbappe’s contract after the game and said it’s “impossible” to discuss it now – presumably because he will have to sit down and chat with PSG chiefs first.

Mauricio Pochettino when asked about his future and Kylian Mbappé contract: "It's simply impossible to discuss about it now, it's not the right moment. We're really disappointed tonight", he told RMC Sport. 🇫🇷 #PSG #UCL

Let us know in the comments if you’ve been turned off Pochettino after PSG’s display in the Champions League?