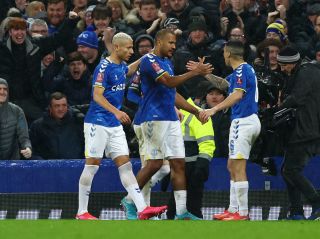 Manchester United are in talks with Everton star Richarilson over a summer move, according to reports.

Although the Brazilian forward is enduring a difficult season at Goodison Park, he is a proven striker in the Premier League, and he injuries undoubtedly made Everton’s situation worse as they face a battle to avoid relegation.

According to Caught Offside, United transfer chief Matt Judge has held talks with Richarlison’s entourage over a potential transfer, as they look to the 24-year-old a bigger deal.

It is also noted in the article that Everton are holding out for somewhere between £60m and £70m for the attacker, but by how much will that change if the Toffees go down this season?

Interestingly, Richarlison is valued to be worth around £49.5 by Transfermarkt, but Everton will be looking to make a profit on their 2018 acquisition.

I think it goes without saying that Richarlison is one of the more talented and valuable players in that Everton squad, having become a Brazil international since his move from Watford, and United could do a lot worse in their search for a forward this summer.

Especially when you consider the need to prioritise a defensive midfielder and how much it would take to afford the slightly overpriced Declan Rice.

Richarlison has a bit of bite about him which I like in a centre-forward.

Let us know in the comments section if you would like United to sign Richarlison in the summer?