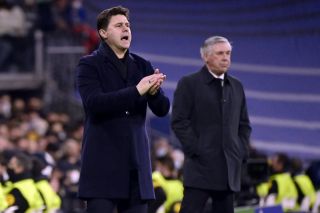 Mauricio Pochettino will be a lot easier to get in the summer.

That’s if Manchester United were not put off by Paris Saint Germain’s Champions League exit tonight, as the Ligue 1 giants threw away a two-goal advantage in the last 30 minutes of their last-16 tie.

Karim Benzema snatched a place in the quarters for Real Madrid with a 16-minute hat-trick at the Bernabeu to shatter PSG’s dreams.

The manager, Pochettino, who has been strongly linked with the United job, is expected to take the brunt of it – like previous managers at PSG whenever they’ve bottled it in the Champions League – not Lionel Messi and co.

It looked done and dusted for the French giants until Gianluigi Donnarumma gifted Real Madrid a way back into the tie. There was even a stage in the second half when PSG appeared to be coasting a little, but maybe too much and that is something that can be changed from the dugout.

This all led to a big reaction from United fans on social media – most who don’t feel Pochettino is the right man for the job, but not all…

Knocked out of the French Cup and Champions League despite having Messi, Neymar and Mbappe but Man Utd's board somehow think he's the one to take the club back to where it belongs.

Poch is a spineless yes man who is destined for failure.

He’s the polar opposite of what we need.

Seeing a lot of blame for Pochettino here, but PSG have been bottling matches for years. I’m not sure what he can do when his players have so obviously melted under pressure?

Nothing but respect for Benzema, what an incredible player. More disappointment for PSG and Pochettino in champions league.

Let us know what you think in the comments section.