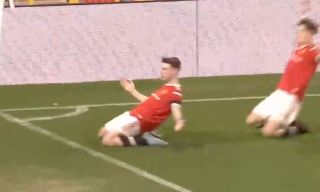 You would be hard pushed to pick a star man on tonight’s performance because everyone has been superb.

Manchester United booked their place in the FA Youth Cup final and Charlie McNeill, who scored two goals on the night, will recieve the plaudits along with man of the tournament (so far), Alejandro Garnacho, for his goal to make it 2-0.

It could’ve been 3-0 at half-time so the final scoreline is is a fair reflection of the game, as United dominated a physical Wolves side throughout the 90 minutes.

McNeill was in the right place at the right time to make it 3-0 at the very end to book United’s place in the final.

Reaching the FA Youth Cup is a terrific achievement and you could see the players were delighted at the full-time whistle, all celebrating as a group — even though that didn’t get on the pitch.

The foundation of Manchester United has always been in its young stars and tonight is one we should all enjoy.

They played really well and make it a convincing win by dominating the game.

United will play the winners between Chelsea and Nottingham Forest in the final.