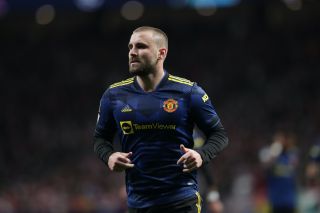 Luke Shaw is willing to signing a new deal at Manchester United.

At a time when it seems like everyone wants to leave the club, with Marcus Rashford recently added to the list, Shaw’s stance may come as a boost to United because the club looks set to lose both Paul Pogba and Jesse Lingard on free transfers at the end of the season.

That’s an unsustainable way for a football club to operate, but so is offering lucrative deals to players who don’t deserve them, which United have done time and time again down the years.

Shaw’s contract expires in 2023 but United have an option to extend that by a further year. However, a new deal would see him pocket more than his current £150,000-a-week wage, according to The Guardian.

Although his performances this season have been poor, Shaw has made 212 appearances for the Reds since he joined in 2014.

Now would be a good time to earn that contract because United have a number of season-defining games over the next few weeks.

Has Shaw done enough for an England call-up?

Well, he starred at Euro 2020 so he’s got a strong chance, but it would say a lot about Gareth Southgate if Shaw didn’t get selected because his form has been below part this season.