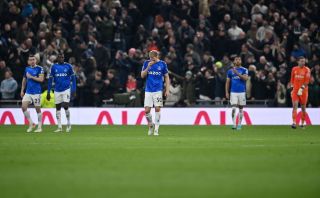 Van de Beek was struggling for game time at Manchester United before moving to Everton and now Carragher can probably see the season why that was the case under our two previous managers.

Even though he has yet to pull up trees at United, everyone wanted to see him shine at Goodison Park before coming back to Manchester with something to prove.

Footballer turned Sky Sports pundit Carragher pretty much singles Van de Beek out as a weak link in Frank Lampard’s midfield, but it raises the question: why did the Toffees sign a player without regular football under his belt to save them from a relegation scrap?

If anything, it shows that Van de Beek has continued to struggle at Premier League level and that explains why Ole Gunnar Solskjaer and Ralf Rangnick were not keen enough to start him in games.

“Fundamentally this group of players at this club is so weak now,” Carragher said, as quoted by the Metro. “The lack of athleticism in that Everton team is frightening.

“None of the back four can run. Harry Kane was running past Michael Keane for one of the goals runs. Harry Kane is not sprint champion. We’ve seen Seamus Coleman two or three times, I feel for him right now, but people are just running off him.

“They’re weak physically and that’s a massive problem going forward for them.”

This doesn’t bode well for Van de Beek’s future in the Premier League.