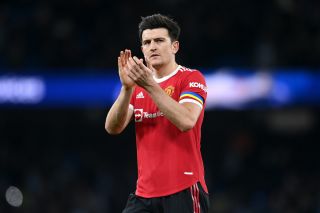 Harry Maguire was on duty tonight ahead of Manchester United’s FA Youth Cup semi-final against Wolves at Old Trafford.

A crowd is expected at the Theatre of Dreams for the youth team clash, with United trying to reach the final for the first time in over 10 years, when they won the FA Youth Cup in 2011.

Maguire was on the opposing side that day, back during his youth days at Sheffield United — before he became an England international and Manchester United captain. The defender came up against a few of his current teammates that day too, including Paul Pogba and Jesse Lingard.

According to Simon Peach of Press Association, Harry Maguire gave a speech to the U18s before they went out for tonight’s warm-up.

Harry Maguire gave a little speech to the Under-18s before they went out for the warm-up. The #MUFC captain played in the 2011 FA Youth Cup final with Sheffield United

Although the game has kicked off, I can’t help but wonder if Maguire speaking to these players has the same impact as previous captions, not just during the club’s most successful years.

Bryan Robson was idolised by the youth players at the club.

Maguire has experience in the FA Youth Cup, which is one thing, but his performance in the Manchester derby — and throughout the season — spoke volumes of a player completely out of his depth.