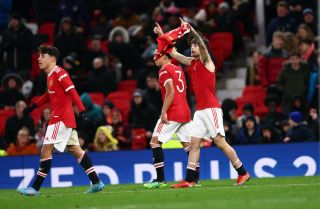 You could say that Manchester United’s academy has been the silver lining in a disappointing season for a club that is just one win away from its first FA Youth Cup final since 2011.

The Reds have had to overcome Scunthorpe, Reading, Everton and Leicester City to reach the semi-finals, with Alejandro Garnacho starring during that cup run with some memorable goals.

I fondly remember the team in 2011 – consisting of players like Paul Pogba, Ravel Morrison, Jesse Lingard and Ryan Tunnicliffe.

The young Reds beat a Harry Maguire-inspired Sheffied United side in the final to claim glory, but tonight it is about the current crop and we’ll be rooting for the boys.

Old Trafford hosts another important game tonight when the U18s take on Wolves in the FA Youth Cup semi-final.

As the most successful club in the competition’s history, it’s a kick in the teeth for everyone at United that we haven’t won it in over 10 years, but head of academy Nick Cox is excited by the progress being made by this talented group.

“We know that here is a lovely opportunity for the boys to put their name in the history book.

“We get that, we understand that and we will do our very best to win.

“The other side of the coin is that whether we win or whether we lose – we could lose the game by a mistake or a lick of paint – it doesn’t actually change the quality of player we’ve got in that group.

“We know that we’ve got some highly-talented individuals who are going to go on to do really well in the game.

“I love that the Youth Cup brings learning opportunities, I love that it replicates a little bit of what it’s like to be in the first team.

“Man United have to be competitive, we have to play to win, but it won’t define us if we were to win (on Wednesday).

“What will define us is the quality of the players that we have and never losing sight of the ultimate objective we have, which is helping young people be the best they can be.”