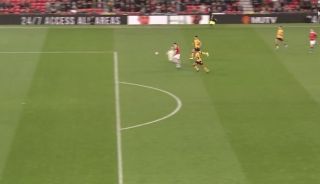 A delightful ball from Isak Hansen-Aaroen found Charlie McNeill in range of goal before the young striker showed his ability to finish.

Manchester United U18s found the breakthrough against a physical and organised Wolves side, which started the game with a back three.

United had periods of domination before the game, with Dan Gore putting in a solid display in midfield alongside Kobbie Mainoo.

McNeill took his goal really well, playing on the shoulder of the last man. He took one touch to round the keeper before slotting the ball past two defenders and into the net.

1-0 to the Reds thanks to a pinpoint finish!

The half-time whistle is about the blow at Old Trafford and the scoreline remains 1-0.

We will see in the second half if Binnon’s boys really have the resilience and belief because Wolves finished the first half strongly.