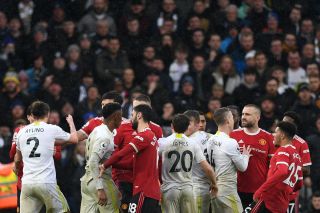 West Yorkshire Police detectives have released CCTV images of ten men they want to identify over missile throwing incidents at Leeds United’s recent game at Elland Road when Manchester United travelled to take on their rivals.

We know that United players were targeted in the process since Anthony Elanga was struck on the head by a missile whilst celebrating one of United’s goals in the 4-2 win.

The suspects pictured from CCTV footage were stood in the Sound Stand at Elland Road – or Elanga Road, as it should be renamed.

A statement from West Yorkshire Police adds: “A 37-year-old man, from Gomersal, has already been charged with throwing a flare during the game and is due to appear at Leeds Magistrates Court on March 23.”

Imagine being 37-years-old and thinking that throwing a flare is a good idea?

All 10 suspects are pictured here.

When Leeds fans are not trying to tear apart the toilets at Old Trafford, they’re throwing coins and other missiles in the South Stand at Elland Road.