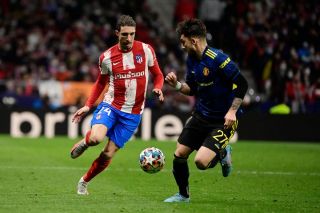 According to Marca, a thigh injury he sustained against Real Betis will rule him out of the second leg at Old Trafford, which only adds to Diego Simone’s injury problems.

The Croatia international started at right wing-back in the reverse fixture when Atletico Madrid were far the better side in the first half. We improved after the break, but at Old Trafford we need to put in a brilliant performance from start to finish.

Meanwhile, midfield star and Spain international Koke remains out injured, but Atleti have welcomed Rodrigo de Paul back which is a big boost for Simeone’s side.

They were also without Geoffrey Kondogbia at the weekend and Angel Correa came off with a knock after the first 27 minutes, only to be replaced by Antoine Griezmann.

Simeone also have Yannick Carrasco suspended for the second leg.