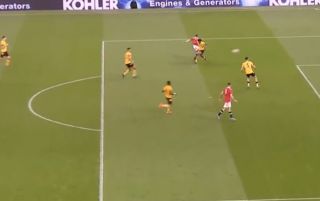 A terrific finish from Alejandro Garnacho makes it 2-0 at Old Trafford.

Manchester United U18s currently lead Wolves in the FA Youth Cup after what has been a close contest, at least on the eye, but the Reds have been clinical in front of goal.

Charlie McNeill opened the scoring after playing Wolves’ back three on the shoulder before rounding the goalkeeper and rolling the ball into the net.

Garnacho scored his fifth goal in the FA Youth Cup to double United’s lead on the night. He curled the ball into the net beautifully.

Wolves face an uphill climb as United put one foot into the final.

The Reds haven’t reached the final since they last won the competition in 2011.