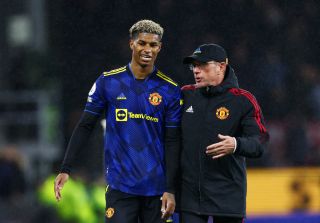 The 24-year-old Marcus Rashford has only started on nine occasions in the 2021-22 Premier League season, but he was missing until October with a shoulder injury.

The likes of Anthony Elanga, Cristiano Ronaldo and Jadon Sancho have frequently been favoured over Rashford up top this year, but it is a discussion for another time, who is better than whom. With the England international playing only 26 minutes in the Manchester derby loss to Manchester City at the weekend.

According to The Guardian, Rashford is ‘seriously contemplating’ a move away from Old Trafford in the summer transfer window, but he is confident that his position will begin to improve.

The article adds that Man United may not accept a prospective transfer request from the 24-year-old, who is locked down to the Red Devils until 2023 with the possibility of an extra 12 months.

Rashford has hit five goals and set up two more in 24 appearances this season, extending his total for the Red Devils to 93 goals and 58 assists in 295 outings across all competitions.

The Manchester-born forward is quick, penetrative, direct, skillful and bent on scoring goals, but United haven’t put him in a set position for a long enough amount of time for him to perfect the art of wing play.

Marcus Rashford was Ralf Rangnick’s only recognized striker as he prepared to take charge of his first Manchester derby. Edinson Cavani and Cristiano Ronaldo were both injured, while Anthony Martial left the club on loan in January.

Regardless of the squad scenario, Rashford started on the bench. Rangnick went with a 4-4-2 formation, although his two most advanced forwards were Paul Pogba and Bruno Fernandes.

It was a risky tactical move, and it exemplified Rashford’s struggles in the preceding 12 months in particular. He seems like a shadow of his former self these days, wearing a red shirt.

Local talent has just not been given a platform to develop and grow. The environment around him has been volatile, and players are usually products of their circumstances.

Rashford is a product of the Manchester United youth system. The English attacker broke through into the first-team picture back in 2016 under then-manager Louis van Gaal and has made remarkable gains over the years. Widely considered as one of the brightest talents to have come through the ranks at Old Trafford, the attacker has already notched up 295 appearances for the club despite being only 24 years old.

Rashford has recorded a total of 93 goals and 58 assists with the Red Devils. However, the continuing campaign has proved challenging for the English international. Having missed a major piece of the first half of the season owing to injury, the attacker has failed to regain his previous form afterwards and has found himself warming the benches more often than not under interim boss Rangnick.

Rashford has appeared 24 times in all competitions in 2021/22, just nine of which have been starts in the Premier League. He has delivered a mediocre return of five goals and two assists. Since the turn of the year, the 24-year-old has started only two of Manchester United’s 10 matches in the league, missing one due to injury and being an unused replacement in one (five sub appearances).

What are his future plans? – Final Words

Rashford’s skill is apparent. Upon assessment of his skill set, he isn’t too unlike to other wide attackers in the Premier League, such as Son Heung-min, Sadio Mane, Mohamed Salah, Riyad Mahrez, Jarrod Bowen, Raheem Sterling and Bukayo Saka.

Reports are already starting to surface concerning Rashford and if his future lay away from Old Trafford. If he was to finally leave, his departure would operate as a harsh indictment of United’s incompetence.