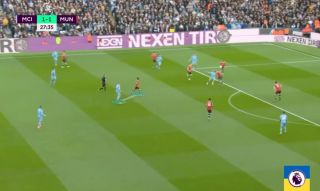 Before I get started on the footage below, I want to stress that Fred is not the only Manchester United player who should be ashamed of himself for the performance we were all subject to on Sunday evening.

Losing 4-1 to your rivals is always a kick in the teeth, but when your players throw in the towel at 3-1 – knowing how derbies against Man City have gone in the past – it beggars belief.

City’s second goal was a shocker to concede as well — from Harry Maguire jumping over the ball to Fred allowing Kevin de Bruyne to roam from a deep position to score.

The video above shows that Fred was in cloud cuckoo land by not keeping an eye on the midfield runner and we all know how dangerous De Bruyne is in those situations.