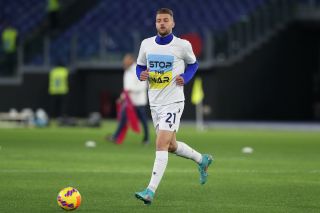 Sergej Milinkovic-Savic has been linked with a move to Manchester United again after it was well documented, at the time, that he was a target when Jose Mourinho was in charge.

In 2018, the Daily Mail reported that Mourinho took it upon himself to scout Milinkovic while he was representing Serbia at international level. That was the last piece on concrete reporting we had on the matter.

However, a new report from Il Tempo (cited by LazioNews24) suggests Milinkovic’s Lazio future could be in doubt as his contract expires in 2024. Obviously, he never joined United when previously linked, but it seems like United’s are being linked without any concrete evidence, though he could be seen as a replacement if Paul Pogba leaves, like The Express suggested in 2019.

Il Tempo claims PSG have long-standing interest in the midfielder and would be prepared to pay between €70-80m to secure his signature.

They also name-drop Manchester United – presumably in attempt to drive up clicks?

You can’t blame us for questioning these claims.

United need to be spending that sort of money on a defensive midfielder – as well as a striker and centre-back – and I’m sure there will be room for some youth team graduates too.

James Garner is pulling up trees in the Championship and I wouldn’t rule him out of being a first team member next season.

As for Milinkovic-Savic, he’s a quality player, but I really don’t think – for the money being touted – he should be among our transfer targets this summer.