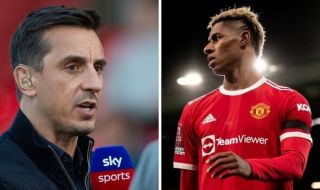 Gary Neville has responded to claims that Marcus Rashford is considering his Manchester United future.

Transfer guru Fabrizio Romano tweeted some big news the day after the Manchester derby, so you can quickly tell that Neville wasn’t too happy about the timing – and it came as no shock to United fans to see more leaks come after that 4-1 hammering.

Time and time again this season, the players have shied away from responsibility.

Neville tweeted: “Here we go,” along with top dripping emojis.

The former club captain doesn’t like it when leaks come from the United camp and it has been happening since the season began, which may explain why the players haven’t been able to show better form on the pitch.

“I thought they [United] were better with Pogba and Fernandes up front than they were when Rashford came on,” Neville told Sky Sports after the match, as quoted by the Daily Mail.

Neville added: “What I would say is when he changed it to a more traditional system and brought Rashford on put Lingard out on the right and Sancho to the left, that was worse.”

Anthony Elanga and Jadon Sancho appear to be Rangnick’s preferred duo on the wings, but the German spoke highly about Rashford on Friday.

Hopefully Rashford can turn things around because when you look at his performances alone this season, Elanga and Sancho deserve the nod ahead of him. United have the option of triggering a one-year extension on Rashford’s deal when it expires at the end of next season.