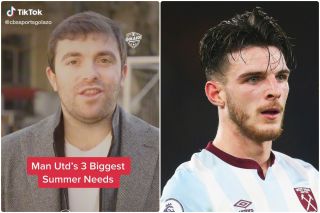 Fabrizio Romano is one of the most reliable journalists out there when it comes to transfer news, hence why he has built such an impressive following on social media. In a new video, the Italian names the top three Manchester United targets for the summer, including West Ham midfielder Declan Rice.

Romano makes it clear that United are on the hunt for a new striker, a defensive midfielder, and a fast centre-back.

Although we’ve all been calling out for the club to sign a defensive midfielder for years, adding a quick centre-back to our defense is another addition that is needed in order to play with a high defensive line – and we can’t play that way against better teams like Man City and Liverpool with Harry Maguire at the back.

It’s clear United need a good transfer window in the summer. We will also have a new manager who should be looking to drastically improve the way we play by implementing an identity at the very least.

But will Declan Rice really leave West Ham for a team not competition in the Champions League? Only time will tell if United miss out…