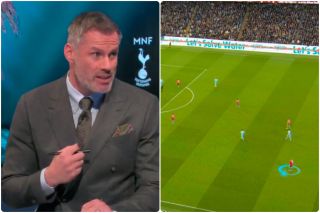 Marcus Rashford is getting it from all corners after the Manchester derby.

Gary Neville has already reacted to the news that Rashford is considering his future at the club, but Jamie Carragher took the chance to criticise the United star during Monday Night Football.

The former Liverpool defender slammed Rashford for the lack of effort he showed during Sunday’s 4-1 defeat against Man City.

And, when you look at the footage highlighted by Carragher, it’s no wonder he didn’t start the match.

🗣 "That is not acceptable, there was two or three in the second half that chucked it."@Carra23 on Marcus Rashford's pressing and what went wrong for Manchester United in the second half against Man City pic.twitter.com/LoOHAlFksy

Carragher branded Rashford’s work-rate as “not acceptable”, and this is not the first time he has been called out for questionable body language this season.

“I know Rashford is getting a lot of stick right now, but that is not acceptable,” Carragher said on Sky Sports.

“When you’re losing 3-1, you can’t sit back, you’ve almost got to go man for man. You need to think, if it goes into my man, I’m going to try and win it back. And what happens is the pitch gets even bigger..

“But this is what I don’t like, and that’s why I go back to the substitutions, Marcus Rashford doesn’t move. Now the others around him are chasing, almost going man for man, getting run ragged.

“They must be shattered by the way, chasing Man City through the game. Certainly the two central midfield players.

“You’re playing against one of the best teams, and with a couple of passes, they’re through you. They almost scored up one end, and the worst thing for me is Rashford certainly wasn’t the highest player in terms of the press.

“There was four or five players ahead of him.. And I don’t want to just jump on a bandwagon. I know Rashford is getting a lot of stick right now, but that is not acceptable.

“It’s not and for me, and I think there was two or three in the second-half who chucked it.”