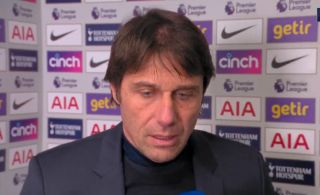 Antonio Conte has told his Tottenham Hotspur players to prove they are progressing by beating Manchester United next weekend.

The Italian won’t settle for Monday night’s 5-0 win over Everton, which came after their 4-0 win over Leeds United, and he wants his players to come out fighting as they look to clinch fourth spot in the Premier League.

If United drop more points this weekend, Ralf Rangnick can forget about finishing in the top four, with Arsenal having more points as well as three games in hand.

Following last night’s win over the Toffees, Conte told Sky Sports: “Today is good to celebrate but I think that I want an answer from my players in the game against United.”

🗣 "Today is good to celebrate but I think that I want an answer from my players in the game against United."

Antonio Conte sends a message to his players to prove themselves against Man United next week pic.twitter.com/yZa85WcqYH

Neither team can afford to lose Saturday’s game but it’s hard to have any confidence going into this clash after losing 4-1 against Man City.

Rangnick can’t afford another performance like that from his players this season!