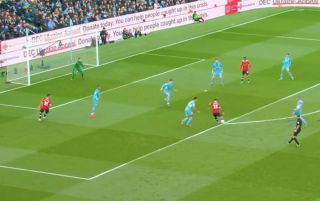 Despite going behind after just six minutes, Ralf Rangnick’s Manchester United have dragged themselves level against rivals Manchester City.

However, although the game’s early scoreline suggested the home side were the team on top, Rangnick’s Red Devils have undoubtedly been the better team during the first half.

Winger Jadon Sancho, who used to play for City’s youth academy, found himself with a golden opportunity to score and the young England international did not disappoint.

Manchester United are level and it’s Jadon Sancho, the former Manchester City youngster with the goal! 👀