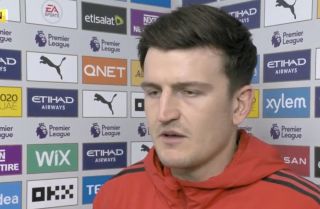 Manchester United captain Harry Maguire has admitted to feeling confident ahead of his team’s derby match against rivals Manchester City.

The Red Devils, led by interim boss Ralf Rangnick, are set for a blockbuster encounter at the Etihad Stadium on Sunday in a Premier League encounter that could have huge implications in both the race for the top four and the title.

Speaking ahead of the intriguing tie, skipper Maguire, who spoke to Sky Sports’ Geoff Shreves, revealed the squad have ‘great belief’ they can get a result against Pep Guardiola’s surging Citizens.

🗣 “I’m always motivated to play for this club.”

Harry Maguire says they need no extra motivation for the Manchester derby and says being left out last week has had no negative impact on him pic.twitter.com/XAA9a5H5q9