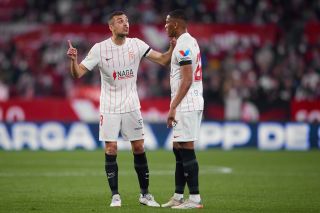 Sevilla are not looking to extend Anthony Martial’s deal beyond this summer, according to reports.

The Frenchman joined Sevilla on loan from Manchester United in January after falling down the pecking order at Old Trafford and he got off to a bright start in Spain, scoring in the Europa League against Dinamo Zagreb.

However, after making just four appearances for the La Liga side, Martial suffered an injury setback that has forced him to miss the last three matches.

Sevilla appear to have already made their mind up about Martial.

“Sevilla won’t buy Martial even if they win the EuroMillions,” a source told Football Transfers, as cited by MailOnline.

“They are happy with him but they won’t sign him permanently.

“Any further deal is not in their plans at all — just these six months to help them challenge Real Madrid for the title.”

Julen Lopetegui’s side are currently five points behind Real Madrid in the La Liga title race, and to make matters worse, Los Blancos have a game in hand.

This means that Martial is set to return to United at the end of the season. A lot will depend on what the next manager has planned but the former AS Monaco academy star has a contract at Old Trafford until 2024.

Let us know in the comments if you still think Martial can turn things around at United?