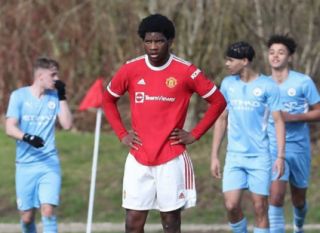 A disappointing result for the Manchester United U18s side after losing 5-1 at home to rivals Manchester City. It’s an experience they will need to quickly learn from before going into the FA Youth Cup semi-finals on Wednesday night.

The game started really well for Manchester United and they found themselves leading after a brilliant goal from Manni Norkett. However, United’s joy was cut short almost immediately as City netted the equaliser 90 seconds after. In what seemed that United would react to the situation, City had other plans in mind. Surely, derby days are always meant for lessons learned and what followed was quite difficult.

Both teams had their share of chances, but it was Borges who gave City the lead and managed to score again at the end of the first half.

Technical director Darren Fletcher was spotted at the game.

In the second half, City started their quest by scoring and United were holding on at this stage. In a much changed squad, the Reds found it difficult to adapt to the game and this was easily shown after City scored their fourth goal of the game.

Maybe playing a back three against City was not the best idea, as the poor defending was getting the worst of us. Five minutes later, Borges got his hat trick as he was almost everywhere on the pitch today. It should be noted that United have a game to think of on Wednesday. It’s the FA Youth Cup semi-final after all.

Our youngsters should recover quickly and learn from experiencing such a hammering. There’s still plenty of games to be played in the Premier League U18 North and before that we have a game where these youngsters must focus on. It’s special and this is their chance to shine. Heads up.