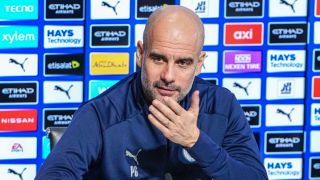 Manchester City manager Pep Guardiola spoke about the respect he has on Manchester United ahead of Sunday’s derby.

The Premier League leaders play host to United at the Etihad Stadium and it will be Guardiola’s 20th meeting against England’s biggest club.

Unfortunately for us, City are 19 points clear of United in the league.

Ralf Rangnick was quick to praise his opposing manager this weekend, rightly calling him one of the best managers in the world, so there is mutual respect between the two managers ahead of the derby.

However, Guardiola has 10 wins from 19 matches against United — three draws and six defeats. He was in charge of City on 15 of those occasions, while there were two games each when he was in charge at Barcelona and Bayern Munich.

Speaking to the media ahead of Sunday’s big game, Guardiola said: “I have a massive respect for the history they [Manchester United] have.”

🗣 "I have a massive respect for the history they have."

Pep Guardiola talks about the respect he has for Manchester United past and present pic.twitter.com/GLSH7yOZnu