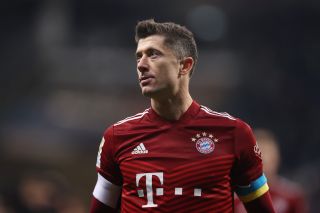 Manchester United want to be kept in the loop over Roberto Lewandowski’s future, according to a report.

The 33-year-old is no spring chicken but he is still one of the best goalscorers in the world. Last season, he broke Gerd Muller’s record of goals in a Bundesliga campaign when he scored a whopping 41.

In all competitions, the Poland star scored 48 goals last season, but this season he already has 39 goals to his name. It would be remarkable if he could beat that record again and I wouldn’t be foolish enough to write Lewandowski off.

This season could also be his last at Bayern Munich.

Lewandowski’s contract expires next summer and there are no concrete signs of an extension just yet.

A report from 90min suggests United are among a host of Premier League clubs keeping tabs on the striker’s situation. The report claims the Red Devils have asked Lewandowski’s entourage to keep them informed of any developments.

There’s no doubt in my mind that Lewandowski would help improve the team but we don’t need another strike in his 30s, facing the wrong end of his career, with Cristiano Ronaldo already on the books.