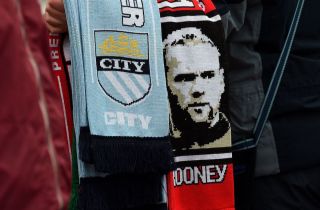 As Manchester United fans, we know we’ll be up against it on Sunday against a Manchester City side looking to win their second consecutive Premier League title.

The Blues have 19 more points than United at the top of the Premier League and that tells you have far away we’ve been yet again this season.

We will need to be at our very best to get a result at the Etihad Stadium, although I wouldn’t put it past our players, even after some of the terrible performances we’ve been subjected to this term.

To get ready for the match, I caught up with Alex Brotherton, who covers City for the Manchester Evening News.

Are you feeling any pressure from Liverpool in the title race?

Alex: “Yes – the pressure is very much on now. I’d say most City fans weren’t naive enough to think the title race was over when City were 14 point ahead six weeks ago, but most probably didn’t expect that Liverpool would close the gap how they have either. It looks like the title race is going to go the distance like it did in 2018/19, so hopefully City can hold their nerve again.”

After falling at the final hurdle in the Champions League last season, can City go all the way in Europe this season?

Alex: “There’s no reason City can’t go all the way in the Champions League – I’d say we’re in just as good shape now as we were last season, the last few games notwithstanding. The main threat I see is if City draw Liverpool in the quarter-finals (when we get there). I think City would get the better of any other team over two legs, but you never know with Liverpool.”

Does sports washing make you feel uncomfortable or are City fans too drunk on champagne to realise how their owners trample on human rights?

Alex: “Yes, sportswashing does make me feel uncomfortable, but I also think that for supporters of clubs like City, Chelsea and Newcastle the issue is much more complex than fans of other clubs appreciate. The UAE’s human rights record and its role in the war in Yemen – and refusal to condemn Putin’s invasion of Ukraine – are disturbing. Sheikh Mansour’s position as deputy Prime Minister of Abu Dhabi means there is a clear link between City and that regime. Personally, playing even a small role in enabling that make me uncomfortable. However, I don’t agree that supporters should necessarily boycott the club or end their support for the club, especially if they were supporters long before the current ownership arrived. Football is an escape for so many people in this country, so to lose that sense of belonging and social connection would be wrong. Regardless of who owns clubs, the soul of football belongs to the fans, and as such I think that if supporters want to bring about change, they are better doing so from within the club than outside. City fans – myself included – probably should do more to raise concerns about the UAE’s practices. Of course there are some City fans who don’t care about the ownership, and some who have already ended their support, but I think that the vast majority lie on the middle ground of perhaps being aware of those concerns but not acting upon them. Hopefully the invasion of Ukraine hitting particularly close to home because of Oleksandr Zinchenko makes us realise that we could do more to hold our owners to account.”

Alex: “Obviously the 6-1 is up there, but if I’m going to pick a derby that I attended then I’d say the 1-0 win in April 2012. The noise when Kompany scored was unreal, as were the celebrations at the full-time whistle. That was the game where I finally thought we could win the league. That Kompany was the player to score seemed fitting as well.”

Which United player did you hate the most growing up?

Alex: “Wayne Rooney. I hated the way he always managed to score against us, and how he’d taunt the City fans when he scored at the Etihad. I can see why United fans loved him so much.”

Alex: “2-1 to City. We have an abysmal record against United at home in recent seasons, but when the pressure is on we tend to get the job done. Famous last words.”