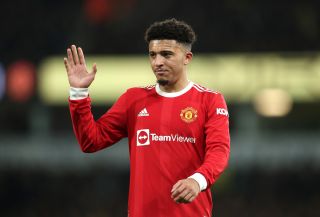 Jadon Sancho has been voted Manchester United’s player of the month for February.

The England international, who joined the Red Devils in the summer from Borussia Dortmund, featured in all seven of our matches last month.

United goalkeeper David de Gea claimed the accolade for each of the last three months, so it is nice to see another player win it, especially when Sancho has had to bounce back from a difficult first few months at the club.

🤏 Our Player of the Month vote was 𝘁𝗵𝗶𝘀 close…

✉️ But the results are in and the winner is: @Sanchooo10! 🔴🥇 #MUFC pic.twitter.com/QIpfdX63tZ

Vote results can be found at ManUtd.com

Sancho is likely to start against his former club on Sunday, in the Manchester derby, after previously snubbing a contract offer from City before joining Dortmund. The English winger went to Germany and made a name for himself as one of Europe’s most exciting talents.

A winning goal against Guardiola’s side would be the icing on the cake.

That would give the team more than enough momentum to push hard for a top four spot.