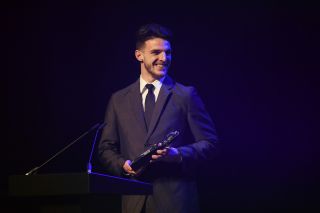 Declan Rice has been heavily linked with moves to Chelsea and Manchester United, but West Ham would want a hefty fee in return for his signature.

The England midfielder, who has impressed this season at the London Stadium, has reacted to his ‘crazy’ £100m price tag — which United might need to pay in order to secure his services.

Rice is a star player in David Moyes’ side but the Hammers know he wants to join a bigger club, so they are set to fight on their back for the best possible deal this summer.

He said (via London Evening Standard): “You hear those numbers and for me it is crazy. All I can do is go out there and perform, regardless of the price tag.

“I just need to focus on playing well and performing at the best level I can.”

Rice was also asked about his aspiration when he replied: “As a young player, I see friends that are close to me, big players winning big trophies.

“Hopefully, these moments I am having now can spur me on to be even better. Champions League is a big aim of mine and hopefully one day I can play in it and do well.

“I feel like I am one of the established top players around the world. I am only 23, so I am still young — that’s what I mean in that sense — but in terms of my playing ability and the way I’ve performed consistently, I see myself as an established player now who’s got good experience and can play at any level if required.”

United are currently fourth in the Premier League but Arsenal have three games in hand.

The only way we’re getting top four now is by beating some of our rivals along the way, despite not being able to beat weaker teams in previous weeks.

We all know that Sunday’s trip to Man City won’t be easy.