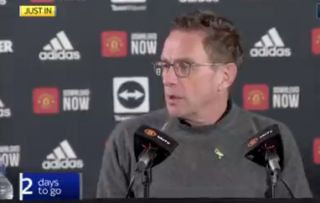 Ralf Rangnick has not made a decision on what Manchester United should do at the end of the season when it comes to appointing a new manager.

The interim manager refused to be drawn on the process of appointing his long-term successor, saying that he’d previously hinted at staying with the club in a managerial capacity “with a twinkle in my eye”.

Neil Custis from The Sun put the question to Rangnick and squeezed in another, asking if he would like to remain manager at Old Trafford, but the German boss totally ignored the second part of the question.

🗣 "I said with a twinkle in my eye, maybe at one stage at the end of the season, I might recommend myself to the club in my role as an advisor."

Ralf Rangnick is questioned on whether he would be open to becoming the permanent Man United manager pic.twitter.com/Jbgwi8sal7

Rangnick said: “I said with a twinkle in my eye maybe at one stage at the end I might recommend myself in the role as an advisor.”

As much as I like Rangnick, there’s a feeling that he would be even better suited to being a director within the club because that is what he knows best.

It’s also important that the next manager is willing to work with Rangnick.