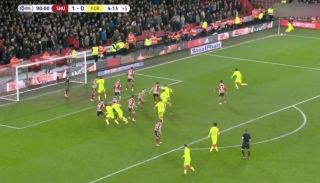 A brilliant corner kick by James Garner set Ryan Yates up to score in the last-minute to rescue a point for Nottingham Forest in a 1-1 draw against Sheffield United.

Forest, who are pushing for one of the play-off spots in the Championship, were on the verge of losing the match before Garner stood up to take a corner kick.

They created a number of chances but weren’t clinical enough in front of goal.

Billy Sharp opened the scoring for the Blades with 69 minutes on the clock.

That looked like the winner, until Yates finished off Garner’s cross to ensure Forest had something to show for their efforts tonight.

Garner has continued to star in the Forest team after featuring in the Championship team of the month for February.

Forest are currently sat in 8th place in the Championship after 34 matches played.