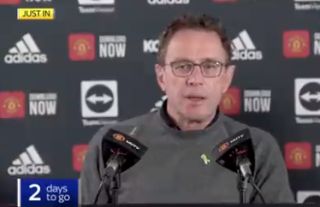 Manchester United travel to the Etihad on Sunday where they will take on Premier League leaders Manchester City, with Ralf Rangnick’s side 19 points behind their rivals.

Every United fan spoke about challenging for the title this season, especially after Cristiano Ronaldo’s homecoming, but we’ve underperformed and now face a fight to finish in the top four. Ole Gunnar Solskjaer was also sacked in November and the club were left without a plan in place before calling upon Rangnick to work on an interim basis.

When asked about how United can emulate City’s recent success, Rangnick said: “To be honest, I have not thought about that. I don’t even know the structure or set up at City.

“My focus was, and still is, on developing the current team and getting the best out of this season. City and Liverpool have continuity and consistency in their head coach for the past five or six years.

“This is what all the top clubs have in common. This is something that needs to be developed at Manchester United.”

🗣 "They have a clear identity of how they want to play."

Ralf Rangnick on whether Manchester United are in a position to get in a position near to Man City or Liverpool pic.twitter.com/Kc2DoBCdB8

One would think that when Rangnick moves into his advisory role at the end of the season, he will begin to work on the club’s structure, but first he will need permission from the hierarchy to do that.

Hopefully the next manager brings the continuity and consistency Rangnick refers to when talking about City and Liverpool.

Rome wasn’t built in a day…