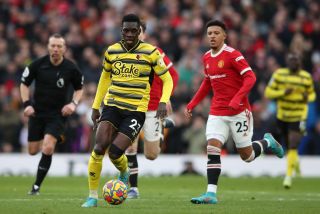 Manchester United will be looking at getting back to winning ways when they take on Manchester City at the Etihad in the Premier League on Sunday afternoon.

The Reds go into the game on the back of a bitterly disappointing 0-0 draw with Watford at Old Trafford last weekend, whilst Pep Guardiola’s men defeated Peterborough 2-0 in the FA Cup.

Jadon Sancho should be recalled to the starting eleven having been named on the substitutes bench against Watford last time out, with Cristiano Ronaldo is likely to lead the attack.

Few, if any, could have foreseen United dropping points against Watford last weekend and in doing so it has left the Reds top four hopes looking increasingly slim.

Facing Manchester City on Sunday provides Ralf Rangnick with, without doubt, his toughest test yet as United boss.

Manchester City have once again enjoyed a fabulous season thus far and currently sit top of the Premier League table. Under Pep Guardiola, City have been relentless and few if any would back against them going on to win the title again at the end of the season but despite that this is a game United could well win.

The Reds have had a favourable record against their noisy neighbours in recent years most notably winning 2-0 at the Etihad last year and if United can turn up and play to their potential like we know they can do then we have a real chance of leaving with all three points.

City are a team who like to attack and always leave gaps at the back and United have players in Ronaldo, Fernandes, Sancho and co who can cause City real problems if they turn up. In the past few games United have been guilty in missing far too many chances in games and for United to beat City they will have to turnaround their fortunes and start taking their chances if they are to defeat their rivals.

It may sound optimistic and some may even say delusional thinking given United’s form over the past few months but I wouldn’t put it past United to take the three points here.