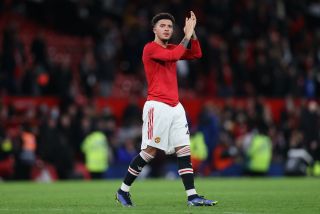 Manchester United received a positive boost during the week when both Edinson Cavani and Scott McTominay returned to training ahead of the derby clash with Manchester City on Sunday.

The Scotland midfielder overcame a bout of illness which kept him out of the last two matches against Atletico Madrid and Watford, while Cavani is back from a longer spell out with a groin injury.

In what we expect to be an extremely tough match for United, Ralf Rangnick is likely to approach the game very differently to last week’s scoreless draw because City are expected to have more possession so that means we will sit a lot deeper.

Ahead of David de Gea between the sticks, we at Stretty News are expecting a centre-back pairing of Raphael Varane and Victor Lindelof. United should be preparing to do lots of defending and that’s why I think the two centre-backs are likely be joined by Aaron Wan-Bissaka and Luke Shaw in the full-back roles.

Sitting in front of the back four, Fred could be joined by McTominay.

Jadon Sancho, Bruno Fernandes and Paul Pogba is our predicted trio to attack behind Cristiano Ronaldo.

Let us know what changes — if any — you would make to the line-up above.