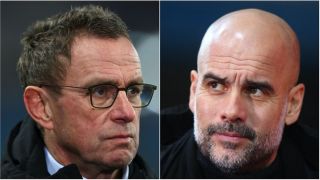 As much as I hate saying it, Manchester City have arguably the best manager in football right now, but has Pep Guardiola spoken highly of Manchester United’s interim manager Ralf Rangnick at his press conference earlier today.

Rangnick hailed Guardiola as one of the best when he spoke to the press after lunchtime and it is clear that the pair have mutual respect after getting to know one another during the latter’s spell in charge at Bayern Munich between 2013-2016.

During the Man City manager’s press conference, Guardiola said he’s seeing signs that United are joining a growing Premier League trend under a manager partly responsible for that trend, especially when Rangnick is seen as a visionary in football.

“We see that with Liverpool, Southampton, with Jesse Marsch in Leeds, a little bit with Chelsea with Tuchel but they play wider with full-backs. It is a tendency. Most proper clubs in England — five or six teams are playing in this way — and important ones like Liverpool, United, Chelsea, Southampton are doing incredibly well and Leeds now.

“The work he has done in Germany is exceptional, creating a proper school at Red Bull – the team in Austria, New York, all the teams play the same philosophy. He came here to try to install it and you see some parts of what he wants to do.”

Of course, Ole Gunnar Solskjaer was in charge the last time these two teams met, only to be dismissed shortly afterwards.

United are currently 19 points behind league leaders City, and 13 behind Liverpool, plus we are losing ground in the race for fourth place.

Now would be a very good time for United to start winning football matches as we’ve some big fixtures coming up.