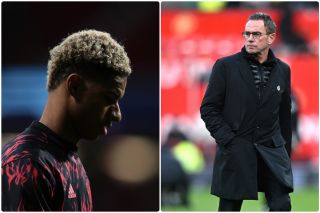 You don’t give up on players like Marcus Rashford. At least our ‘interim’ manager knows that.

When Jamie Carragher called for Marcus Rashford to be dropped from Manchester United’s starting eleven last week, a number of fans were in agreement with the former Liverpool defender turned pundit.

It is not easy to watch a United academy poster boy, who you admire, go through a rough patch of form after most fans expected Rashford to hit the ground running after recovering from his shoulder operation.

Unfortunately, it hasn’t gone that way.

Rashford has scored just four goals and registered two assists in 17 Premier League games so far this season. Furthermore, there are question marks over whether the England international should start in the Manchester derby on Sunday.

But Ralf Rangnick is convinced Rashford will soon rediscover his top form.

The German spoke like a true guardian when the conversation switched to Rashford at the press conference on Friday, promising to put all of his energy into developing his game.

“With Marcus Rashford, we have another player [who I have] continuously been behind and [will work] with, to develop him,” Rangnick said, as per ManUtd.com.

“We have seen that with other players in the past and I don’t see why this shouldn’t happen with Marcus. He’s got abundant talent, he’s got the pace, the physicality. He’s got everything you need for a modern striker, not only if he is playing from the wing or in the centre.

“I will put all my energy in that to help him to take the same pathway that other players did in the last three months.”

United fans should find this encouraging as it gives us an insight into how Rangnick, who we’ve seen get the best out of Jadon Sancho since becoming manager, looks after players even when their form has dipped. It is the type of support Rashford needs to flourish again.

With an arm around the shoulder, clear directions and some luck, players can build confidence. It doesn’t help that Rashford has appeared agitated on the pitch this season, when things didn’t go his way, but it may help if he got back to basics in order to build on his level of performances which is low at the moment.

Rashford will soon to be back to his best and, I, for one, like the idea that our manager has faith in his star players when things aren’t going their way. Especially when some managers think it’s a good idea to throw players under the bus.