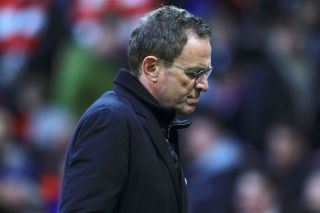 When does a healthy level of professional skepticism become contemptable jingoism? In the media discourse of English football, that regression tends to happen quickly, and it is something that Ralf Rangnick will now be fully aware of, if he isn’t already.

Let me make myself clear from the outset: I am not suggesting Rangnick has turned Manchester United into a squad of swashbuckling, pressing monsters, or even good team of tournament contenders.

However, Rangnick has undoubtedly made United a more coherent, organised team compared to his predecessor, despite the obvious malign influences amongst the playing personnel and inheriting an imbalanced squad.

You can check the numbers if you don’t believe it. United are conceding a goal a game less than under Ole Gunnar Solskjaer and creating more clear chances. They are not as chaotically thrilling and bananas as before. But they are a more serious outfit who look like they’ve actually done some training. Their form since Rangnick’s first match in charge on 3rd December 2021, a 1-0 win against Crystal Palace, comfortably has them in the top four.

The club’s precarious league position regarding qualifying for the Champions League, is everything to do with the shambolic preparation for the season and a predecessor promoted far beyond his ability.

Saturday against Watford was not great viewing, and the team have drawn too many games, nevertheless, under Solskjaer, this was a team that lost 4-1 in the reverse fixture, as well as failing to beat an awful Everton team and losing at home to Aston Villa. United’s failure to kill off games has been more to do with woefully out of form or not fit for purpose strikers and not being fit enough, to carry out an intense, high pressing game.

There is of course the concern that United will struggle with the upcoming run of fixtures, which sees the team have a daunting four-match run of City, Spurs, Atletico Madrid, and Liverpool. On the other hand, Spurs are having their own struggles with a poorly assembled squad unable to entirely grasp what Antonio Conte is asking of them. As for Atleti, as we all saw last week are extremely vulnerable, even on a good day, and there is the creeping sense that they are suffering from Simeone stagnating at the club. That makes no less important, but certainly less daunting.

For United to even be in the position they are in, considering the disastrous first 3 months of the season, Rangnick has done a more than creditable job. However, the media narrative Rangnick has instead been treated as an insidious, hipster, fraudulent interloper who has done a job any Proper Football Man could do.

English football, much like England in general, still holds a tremendous suspicion of thinkers, especially foreign ones (see Fraudiola). The long thread of anti-intellectualism in the English psyche along with the vengeful resurfacing of xenophobia mixed in the suicidal push towards Brexit, is a discourse as pervasive in football as it is in politics.

What good is thinking when you can chew gum, shout a lot, and begin every answer with platitudes such as, “At the end of the day Jeff?”

When you cook this up with the ever-newsworthy Manchester United, you have a terrific recipe for easy money, for the tabloid back pages, Talksport and online sidebars of shame. Ralfy isn’t British or “not knowing the club” is an easy narrative to push onto people who either don’t watch the matches or still think United should set up with the same system they did in 1999.

Such a (wilfully or otherwise) ignorant narrative also fundamentally misunderstands Rangnick’s purpose at United. As well as securing Champions League football, Rangnick was brought in to evaluate the running and structure of the football club before likely acting as an unofficial sporting director to build a more serious football institution, as opposed to the shambolic heritage project of the last 8 years.

Such a long overdue restructuring of the club should be welcomed by all Reds, as well as Rangnick’s treatment of such xenophobic hysteria. Which has been to straight bat it, with concise, considered reasoning and a knowing smirk which says, “are you serious with these silly questions?”

United maybe a commercial juggernaut, they are now however, finally becoming a 21st century football team. Although you wouldn’t know listening to the narrative pushed by some tabloid hacks and ex-pros who have all the insight of Nadine Dorries at a Lambrini fuelled lockdown party.