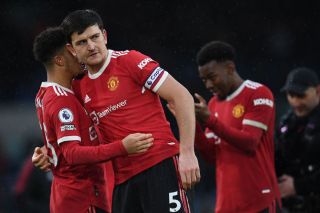 Manchester United are reportedly set to target a new defender in the summer.

This will be exciting news for a lot of fans, but maybe not so much for club captain Harry Maguire because his future at United could be thrown into further doubt.

The Daily Mail claims there are increasing concerns over Maguire’s ability and United are considered signing a world-class alternative in the summer.

There have been doubts over Maguire for quite some time but interim manager Ralf Rangnick has remained loyal to his captain, at least publicly, after stressing that he would not strip the 28-year-old of the armband.

Although Maguire isn’t the only player at United that warrants criticism, it sounds like the others are pointing the finger at him, as Sami Mokbel and Chris Wheeler allude to in their article: “More doubts emerged over Maguire’s form and captaincy on Thursday amid claims that his United team-mates are questioning why he continues to be picked by interim manager Ralf Rangnick.”

However, Maguire was named on the bench for last week’s scoreless draw with Watford — when Raphael Varane and joined by Victor Lindelof in the heart of defence — and it remains to be seen if he gets the nod for Sunday’s Manchester derby at the Etihad.

The two Daily Mail reporters add that, “it’s understood that a new centre-back will be high on United’s list of targets in the summer.” Chelsea’s Antonio Rudiger and Barcelona’s Ronald Araujo are two names mentioned as potential targets.

Moreover, the article suggests that Maguire has upset a number of team-mates this season by openly blaming them on the pitch for mistakes when his own form has been so erratic.

But he is club captain whether they like it or not. Will the next captain have the same problems when he suffered a dip in form?

It sounds like Rangnick is dealing with children, to be brutally honest.