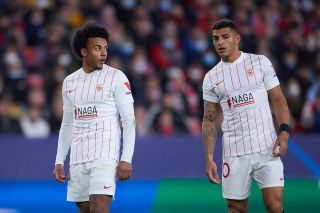 Manchester United could push for the signature of Sevilla defender Jules Kounde this summer.

That is according to Fichajes, who claim that United and Liverpool, as well as Chelsea, Barcelona and Real Madrid, are all keen to sign the Frenchman.

Kounde is a defender who can also play centrally as well as right-back, but it would be interesting to see how he’d cope in the Premier League — as one of the smaller centre-backs around.

Meanwhile, United need to do a clear out in defence, with the likes of Phil Jones, Eric Bailly, Axel Tuanzebe and Harry Maguire all below the required standard to play at the very top. It would be a progressive move to shift out some of those players to make money for a defender like Kounde.

Of course, given that Tuanzebe has struggled on loan at Aston Villa and Napoli this season, it’s unlikely that he will have a place in the United XI next term.

That being said, for the amount touted, I think United will look around the market before committing to Kounde. On top of that, Fichajes are pretty unreliable when it comes to United news.

Moreover, former United defender Mikael Sylvester believes his former side should consider a move for Kounde. He told the Manchester Evening News: “You’ve got to consider Jules Kounde, for sure. That could be one to be added to the list.

“Everybody is linked with United, all the top players and top defenders are linked. I think Jules Kounde should be high up on the list.”