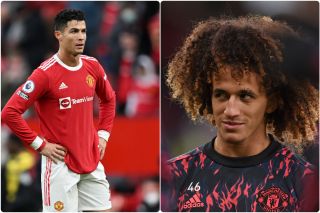 Manchester United youngster Hannibal Mejbri says it’s a dream to train alongside Cristiano Ronaldo, but the 19-year-old claims he is too scared talk to the Portuguese international.

It would be fair to say Ronaldo’s return to Old Trafford hasn’t gone as planned because the Reds have not moved closer to lifting silverware or competing for the Premier League title. We’ve gone from finishing second in the league last season to pushing for a place in the top four.

However, people need to realise that Ronaldo is a world-class player coming to the end of his career, which is something I accepted before the big homecoming in August.

But don’t be fooled by the media’s favourite anti-Ronaldo narrative because the 37-year-old has scored important goals for United this season. For instance, Ronaldo’s goals in the Champions League group stage this season ensured that we reached the knockout phase.

Dimitar Berbatov recently came out swinging in defence of Ronaldo by suggesting his team-mates need to produce more on the pitch. The younger lads should also be using this opportunity to learn from the very best.

The five-time Ballon d’Or winner voiced his frustration towards United’s young players earlier this season, insisting they should be working harder to make the breakthrough.

“With Cristiano, it’s a very, very high level,” Hannibal told One Mondial, as cited by 90Min. “It’s amazing. You can sense his experience, because he might not put the most work in, but when you have to score the goal to win, he will.

“He’s always there when you need him. He’ll be decisive for life. I was surprised to see everything he is capable of doing.

“In person, he’s so impressive. In front of goal, he’s unbelievable. He’s also a really nice team-mate. If you need, you can always ask him for tips, he’ll make himself available. So will everyone else, but he stays distant unless you want him. It’s Cristiano, after all. I don’t even know how to talk to him. I’m scared. I have no idea how to talk to him.

“I’ve watched him on television ever since I was kid, and now, to be with him, it’s special. I’m living through something exceptional. I’m training with one of the greatest in the history of football. I’m learning all the time. I look at everything he does. I look at what he drinks. I do everything like him.”

Hannibal sounds like a bright kid — taking notes of everything Ronaldo does — but someone needs to encourage him to get more from playing alongside CR7.

All of the younger players should ask more questions, pose as sponges and take everything in.