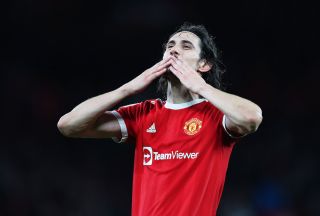 Edinson Cavani is a proven goalscorer with plenty of experience. Ralf Rangnick has been given a boost with the striker returning to the squad in time for the Manchester derby.

Manchester United were without Edinson Cavani and Scott McTominay recently.

However, both players returned to training this week and look set to be available for Sunday’s trip to the Etihad.

McTominay was ruled out with illness, missing the draws with Atletico Madrid and Watford, while Cavani has not played for United since early February after requesting some time off followed by a groin injury.

Ralf Rangnick confirmed at his press conference this afternoon that Cavani returned to training on Thursday. The Uruguayan trained again today and should be at least part of the squad to take on league leaders Manchester City.

The boss said Cavani came through the sessions well.

“He is back in training since yesterday, today was his second training session with the team,” Rangnick told reporters, as quoted by ManUtd.com.

“He looks good to be involved on Sunday, but there are still some question marks over other players. It looks good for Edinson for Sunday.”

Having Cavani available will take the workload off Cristiano Ronaldo.

It’s bizarre that, at 37, Ronaldo is being asked to play in every game for United.

Of course, a number of things happened in recent months that were out of the club’s control, but this is exactly why Dimitar Berbatov defended Ronaldo in a recent interview.

Cavani won’t start but we could see him make an appearance in the second half.

One response to “Edinson Cavani back from injury for Manchester derby”