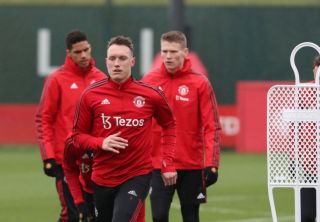 Scott McTominay is back in training ahead of the Manchester derby on Sunday.

The midfielder has missed the last two matches against Atletico Madrid and Watford due to illness, but he has been pictured back training at Carrington.

McTominay was spotted in one of the pictures shared by @StretfordPaddck on Twitter – along with Phil Jones, Nemanja Matic and Raphael Varane.

McTominay back in training 💪 #MUFC pic.twitter.com/3lyaghxwnK

We missed the aggression he brings to our midfield against Atletico Madrid in the Champions League, especially in the first-half, but he will be looking forward to the second leg at Old Trafford on March 15.

His first match match, however, could be the Manchester derby which promises to be a tasty affair between two rivals

It won’t be easy but United are being handed a boost with McTominay’s return.

The players have a full week of training at Carrington due to crashing out of the FA Cup to Middlesbrough last month, but they will need to be at their very best to get anything from the game against City this weekend.

Nemanja Matic returned from injury recently, so Ralf Rangnick will have plenty of options in midfield.