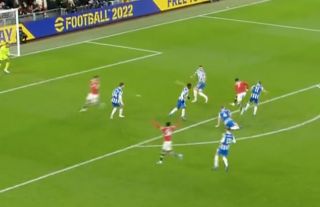 Cristiano Ronaldo’s strike against Brighton & Hove Albion has been nominated for February’s Premier League goal of the month.

It was the goal that ended his 587-minute goal drought for United and it really was something special.

Scott McTominay stole possession from Yves Bissouma and found the run of Ronaldo.

The Portuguese superstar takes the ball from 25 yards out, with four defenders standing in front of him and midfielders running back, but that doesn’t stop him running towards goal. He fools three or four players with a fake shot and strikes gold from outside the box.

🎥 @Cristiano's stunner from #MUNBHA is up for the #PL's February Goal of the Month award! 👏🔴#MUFC

Ronaldo’s goal is just one of the eight spectacular strikes shortlisted for February’s Budweiser Goal of the Month. The others are listed below and you can vote here: