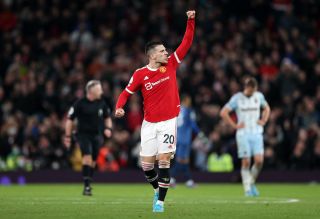 Diogo Dalot is getting more football at Manchester United than ever before and reports in Spain suggest he is a wanted man by the biggest club in La Liga.

El Nacional comment on Real Madrid’s apparent plans to sign a new full-back, in a bid to replace Dani Carvajal, and it is suggested Dalot and Norwich City’s Max Aarons are both on their shortlist of targets this summer.

Aarons could do the unimaginable by getting relegated with Norwich City before joining Real Madrid… and he’d probably come cheaper than Dalot, who has been playing regularly for United since the turn of the year.

However, I wouldn’t be completely against the idea of selling Dalot in the summer. He is a good back-up option but that doesn’t change the fact United need a new right-back which could be Ethan Laird, who is currently on loan at Bournemouth.

Dalot has been linked with a move to Real Madrid in the past – following Carlo Ancelotti’s appointment, when Calciomercato reported on how the Italian manager wanted to sign him after failing to do so for Everton.

Let us know in the comments section if you think Dalot should stay?