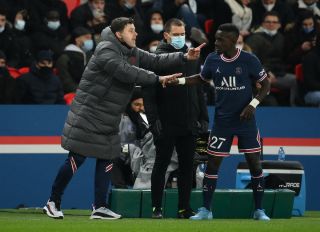 Mauricio Pochettino is believed to be one of the leading candidates to become the next Manchester United manager, potentially hired at the end of the season to replace Ralf Rangnick.

The Argentine has his admirers at Old Trafford after proving his managerial credentials previously in the Premier League at Southampton and Tottenham Hotspur. He took the latter from being top four hopefuls to a Champions League final, and they came close to winning the Premier League too.

Close but no cigar!

Although reports in France suggest Pochettino is under intense pressure at Paris Saint-Germain, with Zinedine Zidane widely tipped to replace him in the summer, Sir Alex Ferguson has given a recommendation for Carlo Ancelotti should the Argentine snub the opportunity to come to Old Trafford. That suggests that United may be moving away from Pochettino in their ongoing search for the ideal candidate.

Moreover, recent reports suggest Ajax coach Erik ten Hag is taking English lessons amid claims he is also in the running for the United job. It is understood that the Ducthman’s heart is set on managing the Red Devils.

PSG director Leonardo has spoken to L’Equipe about Pochettino’s future, saying (via @FabrizioRomano): “We’ve never thought about changing our manager. We’ve never contacted Zidane or anyone

“I can’t say that Mauricio Pochettino has never asked to leave. I have no problem with him. We talk about everything.”

“I can say that Mauricio Pochettino has never asked to leave. I have no problem with him. We talk about everything”. pic.twitter.com/FifPsYo9cK

On the other hand, Leonardo is not going to come out and say they want Zidane when Pochettino has one foot in the Champions League quarter-final and a heathy lead on top of Ligue 1.

Pochettino was careful enough not to completely downplay links to United when speculation intensified earlier this season.

That is what Leonardo has done here but I’m sure his tune will change if PSG crash out of the Champions League.